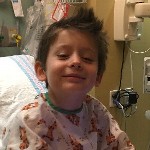 If you didn't already know it, you'd never guess our son, Michael, has a rare form of cancer called Langerhans Cell Histiocytosis (LCH).  You'd never guess he's been under the care of a fantastic team of physicians at the Children's Hospital of Philadelphia (CHOP) and been undergoing chemotherapy for nearly one year.

Believe it or not, on August 3, 2016, the same day Ben learned he had lymphoma, we learned that Michael was diagnosed with LCH.  The Widener family was about to fight cancer on two separate fronts.

Thanks to the critical fundraising efforts of and the research grants provided by the Histiocytosis Association, which have led a heightened awareness of this rare blood disease and the development of successful treatment plans to combat the disorder, Michael is a happy and (relatively speaking) healthy 6 year old boy.  We are truly blessed.  But others aren't so fortunate.

The histiocytic disorders are a group of diseases that occur when there is an over-production of white blood cells, known as histiocytes, which can lead to the destruction of bone tissue, organ damage and tumor formation. This group of disorders can affect both children and adults, though the majority of these disorders occur in children under age ten.  The disease can range from limited involvement to progressive multi-system involvement that can be chronic, debilitating and life threatening.

The histiocytic diseases affect only 1 in 200,000 children born each year in the United States.  Because they are so rare, there is little research into its cause and treatment.  It is often referred to as an "orphan disease," meaning it strikes too few people to attract any meaningful government funding.

While Michael is in a good place now, he's not "out of the woods;" his condition will require monitoring the rest of his life.   Our hope, of course, is that some day a cure will be discovered to treat Michael and others like him who are fighting this disease.

The search for more effective treatments and, ultimately, a cure continues.  We can help!  Please help us reach our fundraising goal by making a gift today!!!

On behalf of the entire Widener family, thank you for supporting Michael's Cause and the efforts of the Histiocytosis Association.