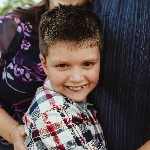 So why are we raising funds for histiocytic disorders?

The short answer is because of the handsome guy pictured above.

In 2012 just before his 4th birthday, our son, Nick, was diagnosed with Langerhans Cell Histiocytosis, a rare cancer and the most common of the histiocytic disorders that occurs when the body accumulates too many immature Langerhans cells, a type of white blood cell that is a subset of the larger family of cells known as histiocytes. In LCH, too many Langerhans cells are produced and build up in certain parts of the body where they can form tumors and lesions and may also damage organs and bones. With Nick, the LCH caused him to have skin lesions on his scalp and also caused the cells to gather around the stem of his pituatary gland. This inhibited the flow of his antidiuretic hormone which has also caused him to have Central Diabetes Insipidus and be growth hormone deficient.

From May 2012 through May 2013, Nick underwent 22 rounds of chemo, hundreds of doses of steroids, and had to take other medications because of the chemo and steroids. In May 2013, he rang the bell at Children's Hospital of Wisconsin's MACC Fund Center marking the end of his treatment and his first step into life beyond LCH. He is now 5 years post-treatment and doing well!  He still lives with Central Diabetes Insipidus as well as growth hormone deficiency but you'd never know it by his spunky attitude and passion for life.

Nick was very lucky to only need 3 surgical procedures: a skin biopsy and the placement and removal of his port. The LCH was caught before the cells gathering around the stem of his pituatary gland could form tumors and for that, we feel blessed. Not everyone is as fortunate, though, which makes the need to support finding both a cause and a cure all the more important. Even as I typed this, a friend connected me with another family whose lives have been touched by LCH.

The cause is unknown, although many possibilities have been explored, including viruses, exposure to toxins in the environment, family history and geography. But no one really knows for sure what causes this disease. While the search for more effective treatments and, ultimately, a cure continues, the Histiocytosis Association is dedicated to supporting and empowering the patients and families who live with these devastating diseases every day.

In the past, we've raised money for Histiocytosis awareness in a few different ways, but our favorite has been Nick's Nickels for LCH. Every time we get change while shopping, we put our nickels to the side and save them all year to donate during September's Histiocytosis Awareness Month. We thought that we'd put this out into the world now for anyone who would like to join us.

From now till September, save those nickels! You can cash them in at your bank and make an online, tax deductible donation here. If you prefer, we'll gladly include any nickels you'd like to give to Nick with ours and make a large donation on September 30th. Our goal is $1,000 which would be 20,000 nickels (that's a lot of nickels!).

Or, if you'd prefer, you can always make a donation of any amount here online whether they be nickels, dimes, pennies, Andrew Jackson's, Ben Franklin's, even Thomas Jefferson's (hee hee!). We'll make a bigger push come September to remind everyone about this fundraising effort if you'd prefer to make a donation then.

Additionally, Aimee is donating $1 from every crochet pattern sold in her Ravelry, Etsy, and KnitCrate shops to this campaign.

All funds raised will go to the Histiocytosis Association to help support the doctors and researchers working to find a cure and develop these life-saving treatments as well as provide support to families.

Thank you for supporting our family and the Histiocytosis Association.